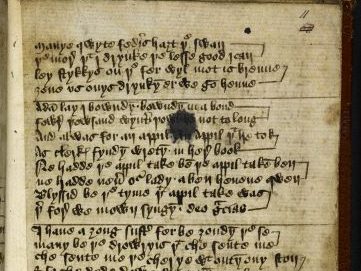 17th Century physician Sir Hans Sloane, with income from his marriage to a plantation heiress collected a large library of important manuscripts. The library was purchased from his estate in 1753 by an Act of Parliament which also established the British Museum, in which the collection was housed. It is now one of the three foundational collections at the British Library.

Amongst these manuscripts, Sloane 2593 is a 14-15th century collection of seventy songs and carols  written in Middle English and Latin and in Gothic cursive. Among the more famous carols in this collection are Adam lay i-bownden, I have a gentil cook, lullay myn lyking and Wolcom ȝol. The collection is thought to have been compiled at Bury St Edmunds in Suffolk.

I first came across Sloane 2593 while hunting for the manuscript of Adam lay i-bownden, well known through Boris Ord’s setting, and this was found in a web archive copy of Thomas Wright’s 1856 Transcription of a large portion of the manuscript.

Amongst the texts are a dazzling array of different songs and carols including some wonderful macaronic Latin-English texts, drinking songs and carols. Among the more prevalent themes in the text are that of domesday, hymns devoted to the Marian sect of christianity, and the martyrdom of Thomas Beckett. All are written in a rich and poetic style, with frequent clever allusions to psalms and christian dogma.

Since finding this resource and spending some time analysing it, I have been inspired to set many of the texts and this is slowly turning into a project to present the manuscript in a concert. Below are settings I’ve finished so far from this manuscript, and there are more on the way.

Jankyn at the Angnus was performed in Ex Cathedra‘s Christmas By Candlelight series, December 2019 and subsequently filmed and released on Sky Arts. In the coming months I will be workshopping some of the other settings with students at the Royal Birmingham Conservatoire.