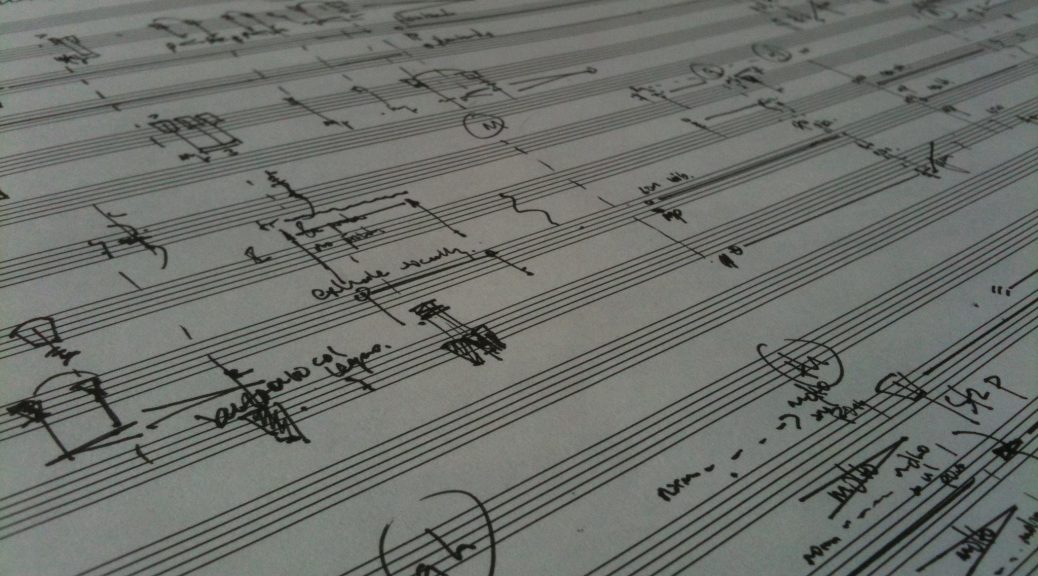 As hard as this problem is to nail down, the problems relating to the nature and style of new music, and pedagogical practice in University music departments relating to composition remain evident in the social practices and assumptions of its practitioners. The problems are by very nature subjective, inconsistent and otherwise influenced by cultural position and social hierarchy and therefore almost impossible to define in a way that we can deal with them succinctly in our own field. Perhaps one should hire a good sociologist to examine the patterns of behaviour and attitude and give this problem some more definition.

Either way, as a result of being difficult to define and thus write lucidly about, these issues remain un-dealt-with and resemble in some way the malcontent of the UK ahead of the EU exit vote. Easy to not take seriously, easy to assume that it is the result of an uneducated opinion, harmful to ongoing progress and attitudes among the new music community.
Here is my attempt to summarise the problems to which I refer:

I use the term New Music as a bookmark term for what is typically undefined. I will not try to define it myself, but my experience of talking to composers and reading about it place it as the result of the influence of the experimentalism of John Cage, the aesthetic principles of the second Viennese school and a vague perpetual ongoing aesthetic arena to which composers seem to sign up as the ongoing avant guarde.

At this point New Music becomes almost impossible to talk about. It resembles Jazz in musicological terms in that the as a manifesto, it is almost impossible to pin down. Jazz is, in our minds a very definite principle. When I think of Jazz, I think of “Fats” Waller, Dinah Washington, The Ink Spots, Gilad Atzmon, Oscar Peterson, Charles Mingus, Miles Davis and about a million others, including many of my friends. When I sit down to play jazz, I have a set of parameters in my mind which comfortably place what I am playing within the remit of what I understand and am physically capable of producing. However I do so with the complete knowledge that what I am contributing a very small part to is a wide field which includes among other things such ill defined terms as “blues”, experimental improvisation, a huge variety of aesthetic principles and approaches and performers that dismantle their instruments as they perform.

Yet, in my mind, I know what Jazz is. Case in point – when I am asked to play (as I frequently am) Blues. This request is impossible to respond to. I suspect they may mean a Boogie Woogie style so I start in that style. When they don’t look satisfied I move to what I define as a Dirty Blues (my own style of John-Lee Hooker inspired down-trodden blues), and when that doesn’t work I move through 4 or 5 other types of blues and usually don’t really manage to live up to whatever drunken expectations they have of whatever part of the century-and-a-half of music tradition they refer to.

I feel I’m straying from my point. New Music is beginning to entrench in composers minds as a barrier, a status quo, a mark on the wall against which we must measure our output. As ill-defined as it is, it is also used as a stick to beat other composers with. “Ours is the true music”, “yours is not good”, or frequently “yours is not legitimate” and conversely, those disenfranchised with the ideal of New Music define their output as “maverick” or “traditional”. Other composer give up when they leave the warm embrace of academia, realising that there isn’t much market for their idea of new music, and yet more completely reverse the type of music they have been writing and spend the rest of their lives grumbling about “academia” and “being outside”.

One thing is evident from the study of contemporary composers, especially well established ones, is that there is no real correlation between them, and there is a massive variety of output pouring into the contemporary music scene. I find “contemporary” to be a useful word, as I can dismiss the idealogical implications of calling something “new” and fall back on the simple meaning of the word to mean current. Even amongst a single composer’s output the stylistic, idealistic and aesthetic nature of their work can change wildly across a lifetime of compositions, and a number of them that have been placed within idealistic genres are quite resistant to the idea (for example “complexity”, a short lived but influential grouping of composers including Brian Ferneyhough, Michael Finnissy, Richard Barrett and James Dillon).

Amongst the attitudes which spring up from from this situation is the dismissal out of hand of the bulk of professional music making, which includes the most highly paid in our profession, as not “serious” music., and yet amongst the general populace these musics are extremely influential. As evinced by composer Paul Mealor’s shooting to fame after his Ubi Caritas was performed at the royal wedding, one could consider this as much the product of good marketing as of a good product. Fame and money are things that composers seem to revile and yet court in equal measure.

I haven’t really dealt with the first point in my summary above. Academia is not exclusively, but mainly the path through which composers tread on their way to establishment. Noticeably some of the more well-established composers in our music scene did not study to postgraduate level, however it is frequent that composers do study for a PhD before being expelled into the wide world to make their way, usually as a sales clerk, administrator or accountant. I could not blame academic practices for the attitudes of its students. Music courses are based largely on coursework, and if a student doesn’t take control of their own work, then they are grasping the wrong end of the stick, so to speak.

However, having spent over 13 years in academic institutions, there are some observations I could make. The first is that rightly or wrongly, the exclusivity and idealogy of New Music seems to exist prominently in the experimentalism of research institutes. The other is that amongst the composition courses available there is an unusual weighting towards the teaching of serialism. In my opinion, this is because, having simple mathematical principals, it is very easy to teach, and is sufficiently current to still be relevant when teaching background technique of current composers. Composition teachers at academic institutes could probably do more to emphasise the open ended nature of composition. “This is the story so far” we should be saying, “what are you going to contribute?”. Composers are, after all, the innovators and expressionists of our generation of music making.

Composition teachers at university could also, I dare say it, prepare composers better for a potential career in Professional Composition, as distinct from compositional research. It seems unpalatable to say it, but university courses have a long and growing trend for teaching professional skills in all subjects relevant to a career springing from that subject. We should be teaching students to treat professionalism and research with equal respect, and to contribute to both. Performers, after all, see no difference in performing Boulez and Grieg, to performing backings to Michael Jackson songs in the proms. Academic institutions could also do more to stress the accessibility of all forms of music making, and to make composers aware that their own music can have influence on people not related to their scene. This above all else comes as a shock to me whenever it happens.

Here again though, I am talking in generalities and am aware of my own ignorance of the situation. Much more happens in universities amongst the cliques of composers and new music performers than does in the lecture hall, and academic institutes can hardly be entirely to blame for the attitudes of their students. Composers just out of sixth form and finding their feet as adults are by very nature ideologues and often arrogant, defensive and anxious individuals. Many continue to be that way the rest of their lives.

What can we do to reverse this situation? How can we clear the skies so that we can think clearly about our own compositions, gain some self-awareness and get past the barrier of New Music?

The first thing we can do is be advocates for our own music. If you continually hold yourself to a standard which you fail to achieve, you never become aware of the virtues of your own contribution. You will never know the value of your own art, and you must fight against the external locus of identity that most musicians hold. When you can become at peace with your own output, you can improve it, and love it. Talking about it to other people validates it in their minds and in yours.

The second thing we can do is to stop being so defensive. This leads to such a lot of jerky behaviour amongst composers that can ruin people. This applies to both sides of the argument – dismissing someone else’s attempts, or a particular field which is not your own, (for example professionalism) is just as defensive as it is offensive. Similarly, getting upset about someone elses reaction to your output is pointless and destructive. Failing to show your contributions to people defensively also pointless. I’ve read about “covering ones genitals” in new music and it perfectly describes what we are doing. What we are all afraid of is Not Being Our Favourite Composer. You are not your favourite composer, you never will be.

The third thing to do is to love our audience, and to respect their opinions. A lot of polemical argument has been presented on the importance or non of the audience. This is once more genital-covering. The argument that music should be autonomous, not helped by the experiments of John Cage, is a complete misnomer. Music is not a collection of sounds, etching of dots on the page, or vibrations in the air. It is the relationship between the brain and the impulses which reach it through the nerves connected to the ear. It relies on the functionality of the brain and is different in every subject according to a million or more parameters. You are a member of the audience for your own music. Respect yourself, and the others listening. I’m not saying pander to other people. Completely the opposite. Respect that you are human, have ears, a brain and musical taste. Respect that other people do as well and don’t talk down to them or dismiss them.

Finally, stop getting so obsessed by canon. We are obsessed with becoming the next Beethoven, Mozart, Schoenberg, whoever. These people all pretty much just got on with it. Reel your ego back in and instead focus on making a positive impact on the people around you. Do good works, do things for free. Perform for people, run community ensembles. Don’t hold everyone else to the high standards that you expect of yourself. The more you ignore your ambition, the more you are likely to succeed at it by just doing it.

I am a composer, and the more I talk and think about it, the more I just want to write Music. Not New Music, not Professional or Experimental music, just Music.