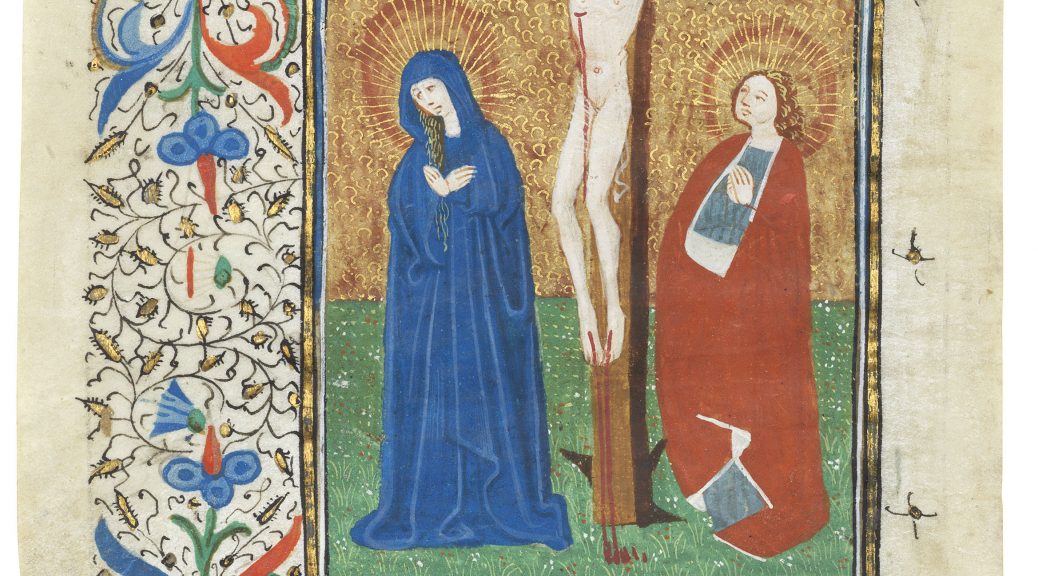 M and A and R and I is one of many Marian hymns found in the Sloane 2593 Manuscript. The words echo the Stabat Mater, a poem in which Mary visits Jesus on the cross. The rich Middle English wording and repetition of the refrain makes this text very distinctive for me.

The first thing that occurred to me when I came across this text was a suspended texture on a held voiced “m” consonant. The chord in my mind still exists as the opening chord:

The suspension was such that I couldn’t resist movement in the tenor part, and as a result this sequence of chords based on the refrain was born.

Initially it was to be a very slow sequence, retaining the held choral texture of the suspended m consonant. However, the second thing that occured to me was a diaphonic texture of a second choir coming in just after the first with the same material, and in my deliberations the choir 1 material took on more rhythm and became a repeated refrain, which suited the text very well, as “M and A and R and I” is repeated frequently in the text as a kind of chant:

In this piece the Choir 1 sing a repeated refrain and are treated more as a texture than a piece of music integral to the structure. Choir 1 should be a smaller choir, although ideally with two singers to a part in the upper voices for blending. Choir 2 should be a fuller choir, with divisi on all parts (more on their material later).

Choir 1 should not be in time with choir 2, except where the score implies the presence of it:

My perfect performance of this piece would involve both choirs being sensitive to the other, so that occasionally, for example on the first “synge I will a newe song” the choirs should lock together. However I leave this up to the performers to coordinate.

Choir 1 should also be physically distant from choir 2. When I wrote this, I thought of St Paul’s church in Birmingham, where frequently Ex Cathedra use the foyer for a distant choir, placing the main choir on the stage on the opposite side of the audience. I would place Choir 1 in the foyer if it were performed there:

Although I wrote this with two choirs out of sync in mind, there is the possibility of having more than one choir 1, each independent in tempo, or indeed creating a sampled version of choir 1 either by looping a recording or by recording a full performance of it to allow for performances using fewer singers.

Choir 2 sing the verses in an ecstatic and beautific fashion. Although I largely followed my instincts with this choral setting, the nature of each sentence in this can be considered analogous to breathing, with usually a gradual crescendo and then subsidence:

Although it is tempting to make this piece soupy and slow and pretty, it is important to pay attention to the fortes of the piece, and to note that a lot of the text setting is rhythmically exact, and that rhythm needs to be expressed. The piece’s metronome mark (roughly minim = 50) should not be lowered, although choir 2 should be free to move and change tempo as needed.

The last section especially should not drag, and it moves out of character with the rest of the piece, expressing the line in counterpoint, signifying a larger group of individuals all offering up the same prayer:

The harmonies of the Choir 2 material are all based on expansion and contraction, with each line expanding out into 5ths and back again according to the position in the phrase, following a D major diatonic mode. It’s a very simple and effective trick for choral writing, and I enjoy it.

My caveat towards this is my own almost catholic guilt regarding consecutive 5ths harmony, something that I was warded away from at an early age with the teaching of harmony using Albert Riemenschneider’s collection of Bach chorales. This piece is inevitably full of consecutive fourths and fifths, however I think it is effective and beautiful. I often think about my early training in this regard – it is a mistake to inhibit composer’s ideas by presenting a set of rules such as this.

In the score of this piece I present both the Middle English version of the text and a Modern English equivalent that fits with the music. In reality, I am not sure which of these two I prefer and feel that to reach a modern audience, a compromise must be made of the two, with the majority in a Modern English pronunciation, but with a few Middle English words pronounced in a modern style for colour and so that the language is not lost entirely.

In the first performance we substituted the following Middle English bits into the Modern English:

It is of course possible to perform this in a sort of “best guess” Middle English pronunciation. The important things to remember are that all of the r’s are rolled, all of the consonants are performed and the “e” at the end of “newe” is simply an inflection (pronounced as an open vowel or schwa) and can be left out or just quietly added to the end of the note (i.e. new—-e song). Here is my transliteration of the text in Middle English:

For more information about how I came up with this pronunciation, see my posts on Wolcum Yule, Adam lay Ibownden and this list of useful Middle English resources.

This piece was premiered by the wonderful Ex Cathedra, led by Jeffrey Skidmore, OBE in their first concert back after the 3rd UK lockdown, 2021. It was a wonderful occasion and performance, and a live recording can be viewed again on Idagio Concert Hall via this link.

for SATB x2  a cappella with soprano divisi
Duration: ca. 4′