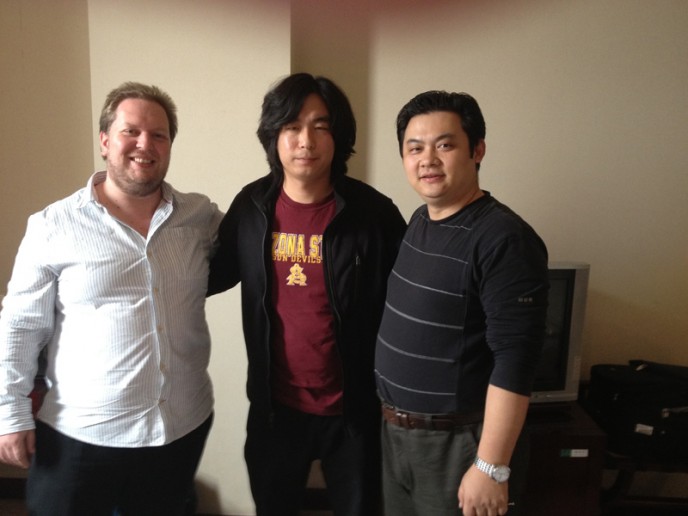 Well, it’s time to go home. I’m starting this on our connecting flight to Beijing. From there we will be flying directly to Heathrow. I’ve been humming “Take me back to dear old blighty” and dreaming of wifi and facebook. It must be finally time to wake up from this escapist chinese dream and smell the bitter worldly coffee of PhD write-up, paid work, school work and real life. But not before I get a chance to talk about my favourite day of the tour by a mile: Huhehote (pronounced uh-eh-oh-eh-uhehehoteueoa, we think, but often appears in guidebooks as Hohhot).

We had varying expectations of Huhehote, but mostly we thought, being the only Mongolian town we were going to visit, that it would be a small rink-y-dink town with a shambolic town hall and an out-of-tune piano. We would experience the agricultural side of chinese life and move on. It stood out as a possible duff among the huge concert halls, sky-scraping cities, Bosendorfer Emporer pianos and startling architecture we had got used to.

It was anything but. Huhehote is in fact the capital city of Inner Mongolia. Compared to what we had experienced so far there were some interesting differences. The flight in was fantastic; we passed over a huge mountaineous region with chinese symbols carved into the hillside. This area went on for a long time until we suddenly came across a huge flat raised plain with squat settlements and low buildings. When we arrived in Huhehote the differences were immediately evident.

The buildings were a lot smaller, and the city is instead sprawling, with its tall block-like buildings resembling the high-street of an old city from the Wild West of America. There were differences in dialect, in fact Mongols speak an entirely different language and write in an entirely different script as well as mandarin. There is also a large hindu presence with mosques and mosque-style buildings dotting the landscape.

Part of my PhD (in composition) has including an exploration of writing for voice, and this has included a study of sub-tone and overtone throat-singing and its incorporation into western classical music as a technique (instead of an effect). I had been teaching myself from YouTube videos (for example this one and my own tutorial here) but having found myself in the middle of Mongolia for perhaps the only time (and having often used a Tuvan throat singing example in various lectures and seminars I’ve given on the subject, I could not reasonably resist the opportunity to find a native Hoomei (mongolian word for throat singing) teacher in Huhehote and set about my mission with passionate determination. I had several leads to follow, including poor Jie, our organiser whom I hounded, the venue manager for our concert, emails to the local universities… I had learned of one of the choir members James Cave, who had met an internationally mongolian band Anda Union who happened to live in Huhehote. I found their website and sent an email, anticipating no response. Temporarily confounded, I joined everyone on a shopping trip to a local market.

The market was very interesting. Beside a huge temple and adorned with a huge statue of Ghenghis Khan, it was what you would expect from a bustling dirty back street antiques market, down to the dubious quality mass-produced tat that you would expect (to the point that it was hard to identify real antiques). Exciting elements included honeycomb toffee similar to that produced in England, a nice warm yoghurt drink sold in glass pots,yam carts and traumatic public loos. The atmosphere was fantastic but the goods were often not. I bought a small hand-made necklace for a friend. Soon though I was itching to find a music shop or something at least that would stimulate me and connect to the culture that wasn’t just tourist tat. I took a cab back to the hotel, determined to find a throat singer, or at least a concert.

My hopes were quickly dashed though when my failed attempts to talk to the hotel staff resulted in some confusing leads. I had one more lead – the film maker, Tim Pearce, who had made a documentary about the Anda Union, had got back to me directly and given me the number of Jane their manager. I was unable to get hold of her however so I went to bed frustrated in my quest.

The next morning, everyone went to visit the temple. I however stayed in the hotel, determined to have one last shot at acheiving my goal. I was a man on a mission and wasn’t to be detered. Tim, an extremely supportive guy, had sent me emails and even a text at midnight encouraging me to keep trying to get hold of Jane, my one lead. I had suspected that I had not put the number right into my phone, Finally however I tried text message, on the off-chance that calls were blocked and texts weren’t. Suddenly, success!! Jane replied to my text, telling me that one of the Andar Union, Uni would like to give me a lesson at 2pm that day! I was so excited and so nervous I spent the rest of the morning texting people and pacing about the hotel. I organised for our vocal coach Zhoe Zhi Wei to translate for me (I was terrified of meeting Uni with no translation help!) and my friend Jon Brigg to video the lesson. We met in the hotel, me a nervous grinning idiot and Uni a very relaxed, chilled out young person.

The lesson was very good. I learned about the three names for the voices in throat singing – Haguraku (bass voice) which he told me I had mastered, Iskure (which he also referred to as bass voice but only to distinguish from the harmonics – basically the fundamental to the whistlle tones) and xiaha (the harmonics). I learned that my Iskure voice was not good – I was basically using my singing voice and “faking it” a bit to produce reasonable overtones. The Iskure voice requires the constriction of very specific muscles in the throat. It essentially dampens the fundamental and really brings out the whistle tones. We also worked on core muscle support and against my tendency to use my nose (i.e. place the sound through my nose). I spent a lot of time sounding and looking like I was on the toilet trying to pass some resistant solids. I got it right maybe once in the whole session, but it was very useful and interesting, and Uni was very encouraging and an excellent teacher. His advice was not to work on the harmonics until I had a firm grasp of the fundamental voice.

Audio extract from my Hoomei lesson

At this point I feel duty bound née excited to tell you about Anda Union’s upcoming appearance at the Edinburgh festival. They will be performing for 26 nights in a row from the 1st August. If you’re going to the festival I totally reccomend that you go! They are the most amazing bunch of musicians and perform some really exciting music. If you’d like to hear clips visit this link. The main reason I tell you is because I will definitely be there, and hopefully getting some more lessons from Uni while I’m there.

I went off to rehearsal that evening still buzzing and happy from my lesson and having acheived what had looked like an impossible goal, only to find when we got there another hoomei singer! Jie had booked a throat-singer to come and give us a general demonstration of hoomei singing. It was very interesting but I was glad to have had my private lesson to work on my technique.

That was not the end of the brilliant day though. The concert that night was brilliant: the audience were very enthusiastic and the English repertoire went down very well. All was going swimmingly and then we started our Mongolian piece, Prise Eight Horse. Suddenly a huge cheer went up! We could feel the excitement of the audience and when Nils came in with his solo they went mad, applauding and shouting as he cracked out the opening F#. It looked like the most intense and wonderful experience. Not only that but when me and Graham cracked out the sub- and over-tones at the end we got about 1 second in before the crowd errupted in a huge applause. It was edifying and wonderful. I felt we connected with them culturally. I had been intimidated, worried that they would judge my throat-singing to be a token western take on their tradition, but they instead seemed so happy that we did it and so enthusiastic in their applause. It was an amazing experience. At the end of the concert a surprisingly tall and native-american looking man wondered onto stage with a mongolian decorative scarf to give to Zhu Buxi, who passed it to Bill, who then passed it quite correctly to Nils.

The best was however yet to come. As we often did, we went out front to meet our audience. The audiences are often very appreciative and excited to meet us, and we’re often asked to have photos with them. It’s a bit of a vanity trip but it’s really nice as a classical musician to be treated like rock stars for a change. That night we went out we were greated by a large group of children. They turned out to be a local youth choir. While we were talking to them Jon Brigg suggested that they should sing to us. They umm’d and ah’d and got their conductor involved and gathered. The conductor then gave them some notes which were raggedly passed around the group. At this point what we were expecting was a ragged unison rendition of molihua or similar. Our experience of youth choirs (we’re talking age 12 or younger) is of awkward children singing well known tunes in maybe two parts.

What we got was Prise Eight Horse, in the same arrangement we had sung it in (although in mongolian instead of Mandarin). The opening chords were rich, beautiful and intense. The tempo was slightly relaxed and they weren’t always together or singing the right notes, but what absolutely blew our minds was the incredible richness and blend of their voices, and the phrasing, which completely blew our rendition out of the water. The girls all sang in an easy, seductively warm tone, with word stresses that we couldn’t begin to emulate. The lads came in with amazingly deep voices for their age and stature. The solo tenor, presumably one of their teachers, came in with an unhurried, wonderful tone and relaxed style totally unlike our slightly rushed outpour of Madarin. The whole experience was incredibly beautiful and moved me to tears. I do not think I was alone. My one regret on this whole tour was that because we were still in our concert dress, non of us had any sort of recording device on us. I have emailed the director to ask if any of them took a video but no reply yet. It is rare that I encounter an experience that so succinctly reminds me why it is I spend my life as a penniless musician, and it is an experience I shall cherish for the rest of my life.