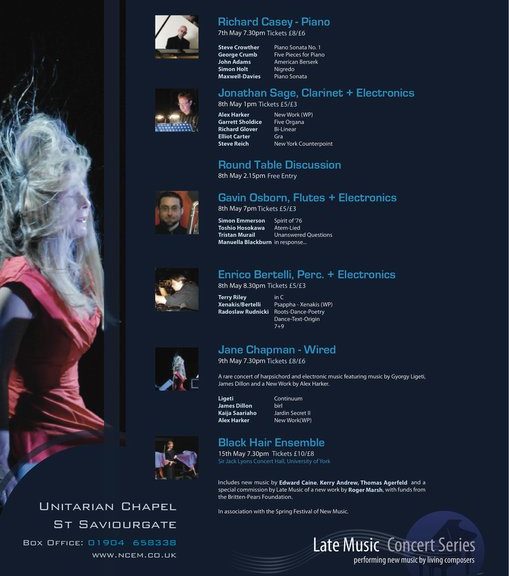 As I’m coming to the end of my time in York it was a bit of a shock to realise that this last Late Music concert will probably be the last I’ll be involved in directly. For me it’s the end of another era.

Late Music, formally the Late Music Festival is an organisation dedicated to the performance of new music by living composers. It was originally a set of concerts called “soundpool”. I first came across the Late Music Festival in 2004 when I moved to York. I don’t remember much about that other than it seemed a really pleasant and buzzing atmosphere, and I remember sitting outside of the National Centre for Early Music in the sun.

In 2005 at the suggestion of my supervisor I wrote a piece for Damien and Maria Harron of the Black Hair Ensemblewhich was performed on 5/5/05 in the festival. In that same festival they were looking for a page turner for the Ian Paceconcert. I was already a fan of Ian’s work and knew a lot of the music being performed (I think it was Ligeti Etudes, Birtwistle’s “Harrison’s Clocks” and Boulez something or other). Ian can be intimidating to the uninitiated and it had been difficult to find a page turner that didn’t drop the pages or get lost. I managed to pull it off and I was asked back the next year to page turn for the whole festival.

From there on and after getting to know the organisers (at that time composers David Power and Steve Crowther) I started to be involved in the organisation of it. It was a great opportunity and over the years I have accrued a lot of experience and met some really fantastic composers and musicians, some of which were my idols.

Over the time I was on the committee I had many different responsibilities including helping with funding applications, choosing program order, liaising with the artists and the venue, designing posters, programming websites and keeping that and twitter/facebook updated. For a while I was responsible for recording the concerts and organising tech riders. I also spearheaded several projects including a call for new upcoming performers to play lunchtime concerts, Late Music Publishing which I organised and designed the covers for (and which no longer exists). At the concerts I would largely perform back-stage functions and would still page turn.

The future of the festival was threatened in 2009 when venue prices went up and the recession kicked in, resulting in several failed arts council bids. By then I was very invested in the project and with Steve Crowther, the then head of the committee, we rebranded to ‘Late Music’ and turned our main output into a concert series in a smaller less well known venue (the Unitarian Chapel, St. Saviourgate, York). This took a lot of pressure off and changed the focus of Late Music. With the easier budget Late Music became wholly focussed on only performing the work living composers. The concert series was the first Saturday of every month with initially a couple of full weekend mini-festivals. I was chiefly in charge of the lunchtime concerts for which I continued my call for performers.

The focus of Late Music changed again though with the inclination to make the concerts more accessible to the general public. A lot of the concerts went, including my lunchtime concerts and any mini-festivals, and focus changed entirely onto a monthly evening concert. By this time the committee had accrued Peter Boardman, ex-arts officer for York City Council and Judith Clough. Peter is now head of the committee. Around this time I left the organising committee to focus on my other musical activities.

I remained involved as a backstage hand though and later on started interviewing composers for the pre-concert talk. This is something I enjoy a lot and it’s been nice to interview some really great composers, including two whose music I’ve been familiar with since my undergraduate degree.

It’s sad to leave this behind. I hope to continue to have some link with Late Music and I’m really grateful for the enormous amount of invaluable experience I accrued with them, not to mention the many commissions and professional performances they have given me. Steve particularly has been very supportive over the years and I’ll miss his Bradfordian wisdom 🙂